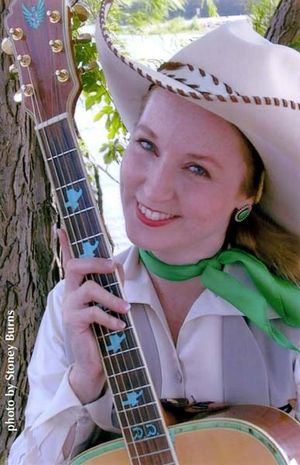 Hailing from Fort Worth, Texas, Miss Devon is a top entertainer in western music, and has been recognized by the Academy of Western Artists as the Female Performer of the Year 2009.  She's noted for her vintage sock-rhythm guitar style, and warm 'swingtime cowgirl' vocals, which bring to mind legendary B-western ladies of the silver screen, Dale Evans, Rosalie Allen, Patsy Montana, etc.  Like them, her lively persona intrigues and engages both kids and adults in her audience.  She holds a Grammy certificate for her participation as the singin', yodelin' voice of Jessie, on the Walt Disney CD, Woody's Roundup featuring Riders in the Sky, which was the follow-up to the movie, inspired by the characters of Toy Story 2.  She has performed in and out of that character coast-to-coast, and all across the American West, including at the renowned Grand Old Opry in Nashville, Tennessee, and at Pixar Studios in Emeryville, California.  Around her home stompin' grounds, Devon has made personal appearances with Radio Disney, Imagination Celebration, libraries, schools, public festivals and private events. She has appeared onstage at the Bass Hall with Riders In the Sky and Michael Martin Murphey, and has performed several dances with the legendary western swing group, The Texas Playboys. She is also frequently seen on Encore's The Westerns Channel, and RFD-TV.


Jessie Robertson, aka 'Outlaw Jessie Del':
When this western gent joins Miss Devon on the stage, things get more fun than puttin' socks on a rooster.  According to witnesses, he's the rowdier half of the duo, and he got his name 'cause, as Miss Devon says, "It's plumb illegal what he does with Milk Cow Blues!"  Like all outlaws, Jessie has been known to disappear into at least a dozen alias personalities, so watch him close!  With fine tenor-to-baritone vocals (sometimes favorably compared to those of Tommy Duncan), added to some swingy saxophone rides, a little sleight of hand, and a LOT of charm, this rascal just might make a clean getaway with yer funny bone.